I have been making this bread weekly now for the past month so I thought it was time to share. If you weren’t aware, I am about 10-12 weeks out from competing in the bikini division in the NANBF. I track everything I eat and I have specific macro goals for each day which are split up into ~5 meals. This bread was designed to meet my macro goals for one meal. If you are eating more calories and get more carbs have 2 slices, top with almond butter or just enjoy as a snack. If you are a cookie and bread eating person that is not really into health and fitness this probably won’t taste good to you or your family. It is just a creative and convenient way for me to get my carbs and protein with some additional vitamins from the pumpkin. A normal breakfast on prep would be oatmeal and egg whites so I just switched it up a little.

Mix and pour into greased bread pan, bake at 350 for ~45 min but you will want to watch it.

If you would’ve asked me how I felt about my upcoming competition 4 weeks ago I would’ve had a negative response. I was feeling discouraged and I was not happy with my progress. Instead of quitting I decided to change the plan but not the goal. We made some pretty drastic changes to my macro nutrient intake and I brought the focus every day to my strength workouts and cardio. Four weeks later I couldn’t be happier with my progress pics and I am beyond excited to push myself even harder the next four weeks. I have three more full weeks of working out in the gym until peak week. There’s only one month between these photos. I cannot wait to see what one more month will do before I hit the stage. Happy Monday friends! Today I am feeling good and I am working one day at a time toward my goal.

All right, I am five weeks out from my competition and the scale finally started moving. Last time I blogged I was frustrated because I just wasn’t seeing results and the fat was not leaving my body. I’m not saying things are going great but I did finally drop some weight and I’m seeing much more definition. The weight I am at now is still much higher than my previous competitions but that could have to do with the change in my body composition and all of the weightlifting I’ve done in the off-season.

The struggles I’ve had the past week have been pretty real. We lowered my complex carbs to only 75 g per day with one refeed and one lower carb day when I rest. I feel great in the morning and have tons of energy and my mood is positive. At about 4 PM I lose my shit. This is no joke, I literally lose it on anyone that walks near me. If you don’t want to bitchy response don’t call or text me after 4 PM. I’ve been rude to my father-in-law, my kids and husband (daily), and even my husband’s friend who was being nice and offering us a treadmill for sale. Hopefully they read my blog because I was too bitchy to even apologize. Carbs are in essential nutrient that provide your body with fuel and affect your brain function. When you deplete them you don’t just have low-energy it affects your mood, your focus and much much more. I do not recommend low-carb diet for any of my clients unless they’re looking to compete in we are in the final stretch and in need to really tap into fat storage. Your body can burn fat while you eat carbs, I’m just in a very tight timeline.

My overall calorie consumption is on average less than 1300 cal a day. I’m lifting daily with weights and then doing about 45 minutes of a steady state cardio. I don’t have much energy to do high-intensity training and I burn out quickly. Some days I have fun at the gym other days it feels like a total chore and I hate every minute. I found that it’s best if I work out before 1 PM otherwise I have zero energy and my mood sucks.

Although my mood isn’t very enjoyable my kids fully support me and watch every damn thing I put my mouth. I took a bite of an apple the other day and Bryson asked “um, are you allowed to eat fruit?” My oldest came home from college and even went to the gym with me to train back. I think he got a little irritated with all of my instructions I was giving on the proper way to lift so I will try to bite my tongue next time. (Heaven forbid his mom who is a personal trainer gives instruction on proper form).

My goal this week is to order my new suit and lose another 1 to 2 pounds. I’ve consistently lost at least a pound over the last three weeks and want to keep that going in the right direction. When you’re trying to maintain muscle while losing fat it’s healthy to lose 1 to 3 pounds a week but nothing more. I’m consistently losing 1 to 1 1/2 pounds a week. For my suit I am switching colors this year and debating between a deep emerald green or a black with colored crystals. It takes about 3 1/2 weeks to get your custom suit so I need to order it this week. I’ve also started tanning so that my butt isn’t super pale. Even with the spray tan if you have white butt cheeks it shows through.

I am not a competitor that stays show lean all year and I still have a lot of work to do over the next 5 weeks.

So I am less than eight weeks out from my next competition and I am not feeling ready at all. I went into this prep with confidence and excitement and after four weeks of dieting I am not seeing the results I had expected. The scale hasn’t really moved at all and I’ve only lost a few inches. I’ve compared my eight week out photos this year to the ones I took last year and I am noticeably larger. I know that I put on muscle this past 12 months but I’m still not as lean as I feel I need to be eight weeks out from the show. The first time I ever prepped for a physique competition was over two years ago, and to be honest, the weight-loss part seemed almost too easy. I followed the macro plan, executed my workouts and the pounds seemed to shed off. They actually came off so quickly that my trainer had me do a show earlier then we originally planned for. My second show was a 12 week prep, it went smoothly, I took first in my class and felt amazing on stage. For my third and fourth shows I switched to a different trainer to learn another approach and experience a new challenge and came in even leaner yet. We cut my carbs a lot sooner than previous preps and added more cardio, which brought my lower body to the leanest it has ever been and gave me a more balanced look. My plan for this show was to take all that I’ve learned from the last four shows and formulate a perfect plan for me. The problem is, I have grown older, my body has adjusted to this lifestyle and things just simply don’t always go as planned. There was about 24 hours where I contemplated calling it quits. I realized that this was not something I was willing to do because when I set off to accomplish a goal, and go public about that goal, I am the last person to back down. I also want to set an example for my children and show them even when things don’t go as planned you never quit, you adjust the plan, but never the goal. Quitting is not an option.

For those of you interested in what my plan consist of I am lifting weights six days a week, doing 45 minutes of steady state cardio five days per week on either a stairmaster or incline treadmill at 8.0 or higher, eating 120 g of protein, 34 g of fat and now carb cycling between 125g carbs, 100 carbs and 75 carbs on my rest day. My total calories started around 1600 but currently are below 1300. This is my fifth competition prep and all five have been different. Do not read my macros and set yours to be the same. Everyone’s body is different, everyone’s metabolism is different and no two competitors should follow the exact same plan.

Another thing I did this competition prep that is probably made me dislike my progress pics more is that I have put on a competition suit for my progress pics ever since day one. These swimsuits are extremely small and should never be worn in public unless you are doing a bodybuilding show with a crazy orange spray tan and huge spotlight. I normally wear my normal bikini all the way till about four weeks out and then I am brave enough to put on the itsy-bitsy sparkly bikini. To have true progress pics I decided to wear it from day one and obviously I do not look good in it. For modesty’s sake, and the fact that I have three kids, I will only show my front pose and keep the back pose to myself. I do not consider myself overweight at all and I am not posting this so that people can tell me I look good. I am simply sharing my progress pic to be out in the open about competition prep. I hope to be about 10 pounds lighter when I walk on stage and obviously way more defined. I have 7 1/2 weeks to go and there is no holding back. 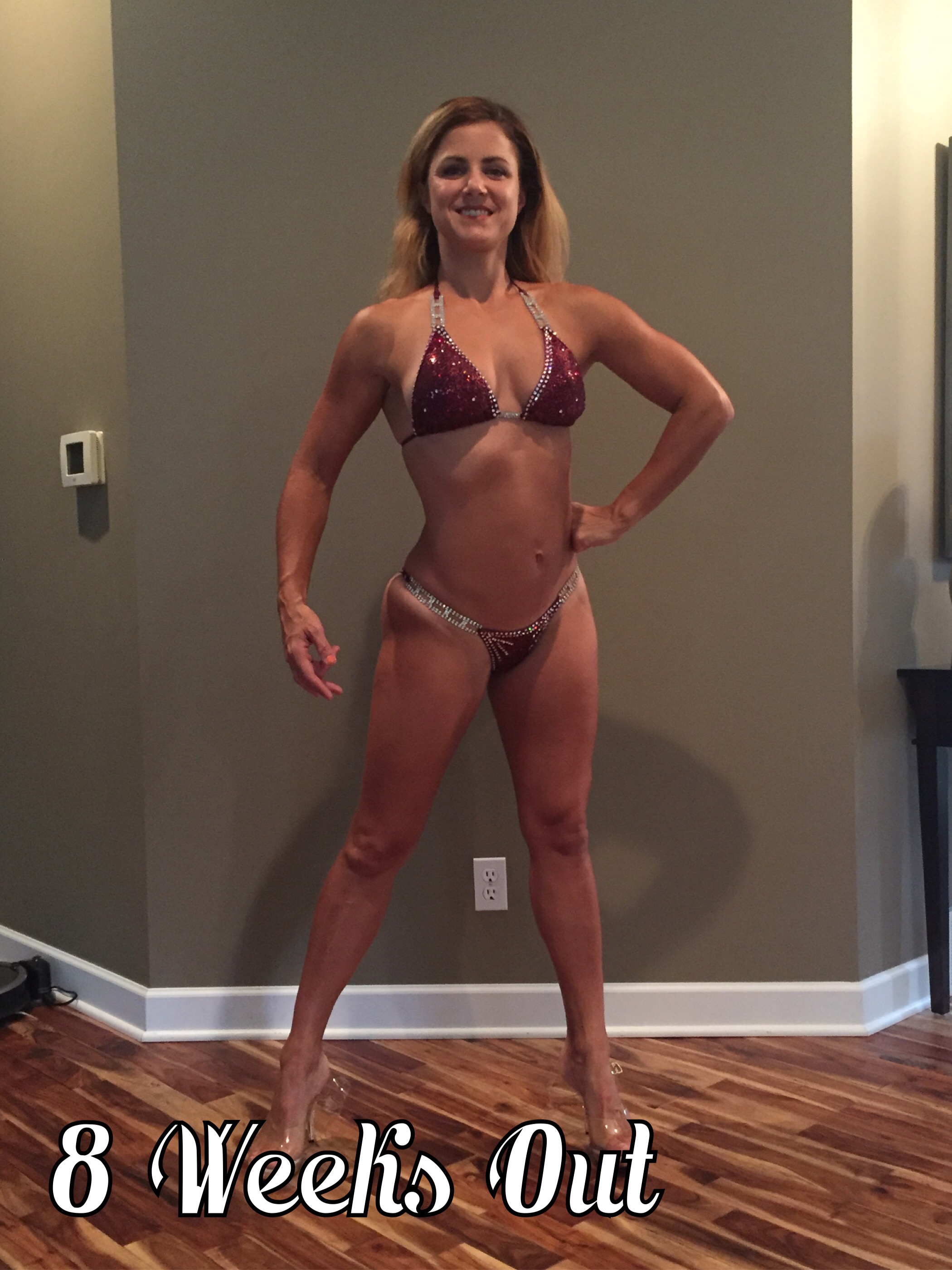 Click the image to learn more about who I am